Well, exciting things are happening this week, one of them being the reveal of Carolyn's cover for her debut novella, 'The Diplomat's Daughter', book one of the Protector Series.

And here it is! 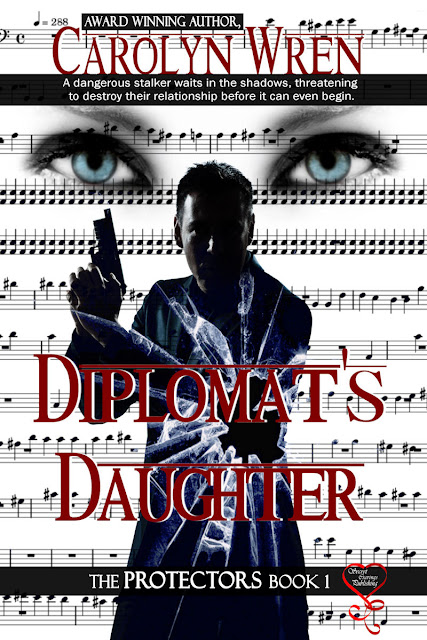 'The Diplomat's Daughter' will be released on November 16th by Secret Cravings Publishing! We're all very excited about the release of our Emerald girl's novel and be sure to mark the release out on your calender.

And to top things off, we have the blurb to share as well:


A covert operative. A life filled with secrets.
Jared Knight works with an elite group of agents trained to track down the worst criminals humanity has to offer. His career leaves no room for relationships.
On a dangerous assignment in Monaco he is captivated by a woman in a crowded ballroom. Disturbed by the uncharacteristic lapse, he is determined to forget her...
Five years later Jared offers Cecilia Benedict his protection when she becomes the object of an overzealous secret admirer. Unbeknown to Cecilia she is the woman who has haunted Jared’s thoughts. He can stay away no longer now her life is in danger.
Cecilia is intrigued by Jared’s serious manner and deep grey eyes. In the close confines they share she finds herself emotionally and physically drawn to him. An attraction grows...
But danger lurks in the shadows, threatening to destroy their relationship before it can even begin.
Posted by Unknown at 16:51